During his annual national inspections following the 19th CPC National Congress, CPC General Secretary Xi Jinping started his tour by reviewing operations at the Xuzhou Construction Machinery Group Co., Ltd (XCMG). President Xi’s on-ground visits are crucial for providing citizens and observers with his thoughts on the themes for national development in the coming year, and often shape the philosophies and activities of various domestic industries. During this particular stop, President Xi voiced his support for XCMG’s excellent in independent research and innovation, and the ways the company has strengthened the development of the real economy and the manufacturing industry.

Northern Jiangsu’s vigor remains unaffected, even with the arrival of winter. On December 12th, the day President Xi left Beijing for Xuzhou, he chose to visit XCMG first. Originally founded as the “8th Arsenal of South Shandong for the Eighth Route Army” in 1943, modern-day XCMG has managed to steadily increase its share of domestic and overseas construction machinery markets. The company has also made visible advances in both intelligent manufacturing and construction projects for military and civilian projects, especially in the pursuit of activities related to the Belt and Road Initiative. 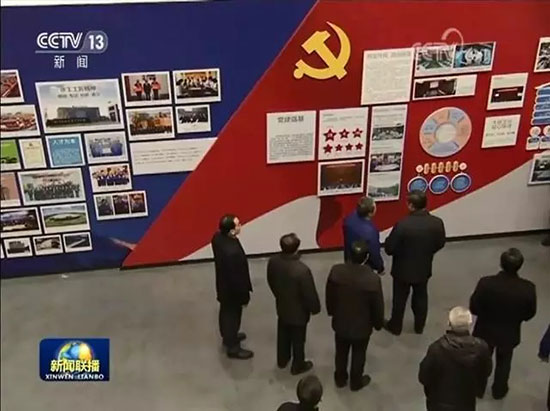 President Xi displayed great awareness of the company’s profile, speaking at length about XCMG’s business development and multinational cooperation, as well as its talent- and Party-building efforts. He also acknowledged the company’s persistence in the revolutionary cause and its steady stream of achievements in past decades. Emphasizing the role of state-owned enterprises as both the material foundation and political protection supporting a distinct Chinese society with socialistic characteristics, President Xi pushed XCMG to continue making strides in deepening reforms and enhancing management in accordance with the guidelines of the 19th CPC National Congress. 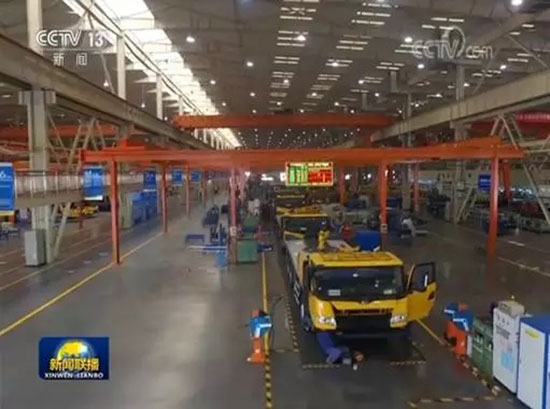 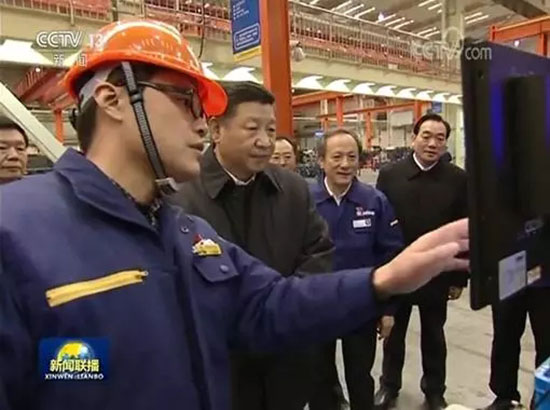 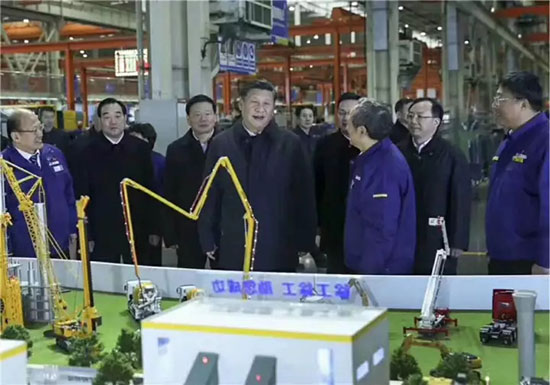 Chairman and Secretary of the Party Committee of XCMG Wang Min accompanied President Xi during the course of the visit. He introduced to him the largest Chinese-made assembly line of crane machinery, and reflected on XCMG’s communism-based origin. He also referenced XCMG’s four guiding principles- driving development through innovation, charting a path based on internationalization, hiring top talent, and investing in party-building while making full use of available political advantages. President Xi showed his approval of XCMG’s philosophy by nodding approvingly of Chairman Wang’s words. 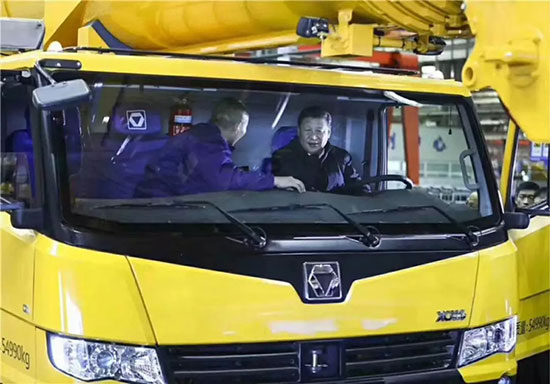 President Xi also boarded the cab of the purely indigenous all-terrain crane XCA220, inquiring at length about the details of technical innovations and operation procedures. President Xi pointed out that developing and growing the real economy, with the manufacturing industry at its core, was of great importance. Since the equipment manufacturing sub-industry forms the backbone of the overall manufacturing industry, China will need to increase investment, strengthen R&D, and gain influence over technical discourse to occupy the most commanding global position in modern equipment manufacturing. Innovation is the source of core competitiveness of enterprises, as there are many techniques that either aren’t available or cannot be purchased. President Xi urged a shift from “Made in China” to “Created in China” to create legacy brands and implement the major policy decisions of the 19th National Congress concerned with bringing about revolutions in quality, efficiency and decision-making power. Highlighting the role of state-owned enterprises, President Xi said they should serve as a major force in supply-side structural reforms by aiming to satisfy international standards and leading other domestic industries in moving up the global value chain. President Xi exhorted XCMG to focus on global frontiers, and explore new modes and experiences in development. 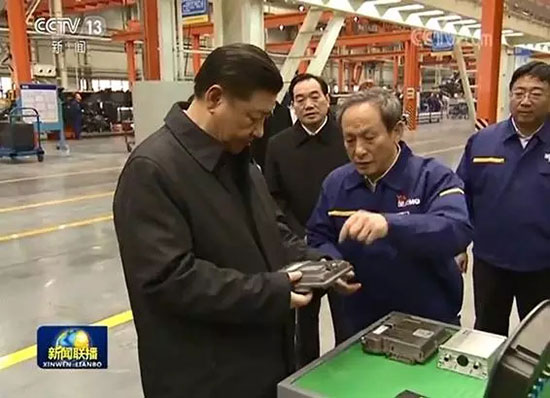 While surveying the production line, Chairman Wang reported that XCMG not only built the core strengths of mainframe, but also the R&D on key components to solve the issue of ‘hollowing out’ in the manufacturing industry. President Xi specifically asked if XCMG had any control over foreign-made components. Mr. Wang replied, “If we need something we do not have, the price is high. As soon as we have it, the price of the component falls”, hearing which, President Xi laughed. 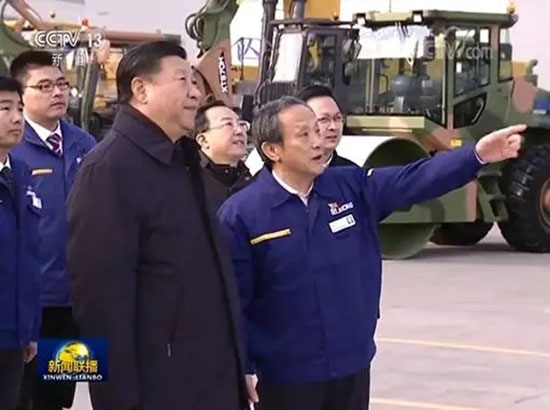 In the square outside the workshop, fifty models of XCMG’s construction machinery products used for all kinds of infrastructure projects and construction, including roads, railways, bridges, airports, ports, buildings, energy, mining, fire engineering and sanitation, lay arranged in an orderly manner.

Among them, a mountain excavator was being operated for a demonstration. President Xi attentively watched the performance of the machine and gleaned details of its functions and usage. President Xi encouraged XCMG to continuously expand the scope of its technological advantages, extend its market share, and create more economic efficiencies. 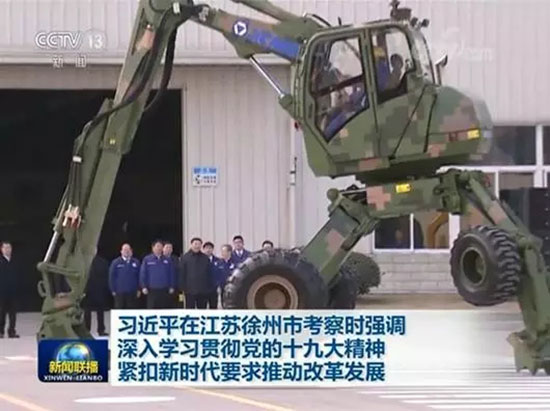 Lu Chuan, president and deputy party secretary of XCMG, said that President Xi's assessment was meticulous, not only with respect to the goals, but also the measures to achieve them." 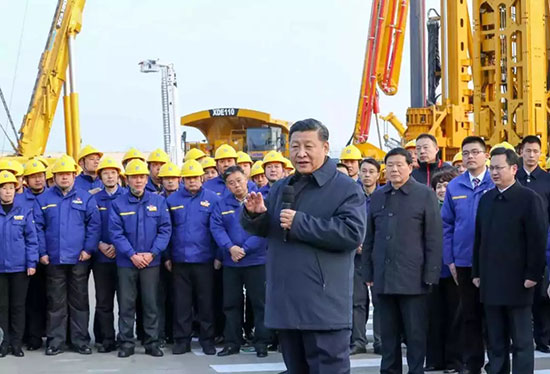 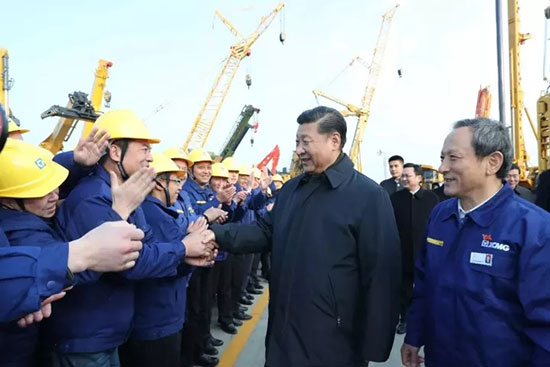 After the demonstration, President Xi visited XCMG‘s laborers, technical experts and other staff representatives in the square and remarked with enthusiasm how XCMG’s glorious history will drive it towards a bright future. China's economy has been transitioning from a phase of rapid growth to a stage of high-quality development, a pivotal stage that must be overcome with each industry and enterprise growing in a steady manner. The 19th CPC National Congress depicts a beautiful blueprint for building China into a modern, powerful socialist country where the gains of development shall be enjoyed by each person who takes a corresponding amount of responsibility. The entire staff should strive for the realization of the Chinese dream by coordinating efforts, gaining a sense of mission and pride in their work, cherishing their contributions, and demonstrating healthy competition while carrying forward the spirit of craftsmanship and labor.

President Xi's speech invigorated the attendees who lamented that he could not spend more time at the XCMG site. When the time came for President Xi to bid his farewell to the staff, they lined up in front of cranes, road rollers, excavators and other XCMG machines, cheering and applauding the president.

“XCMG will remain loyal to the party and win honors for our country. Please rest assured of this!” “I trust you.” Chairman Wang Min, who had served XCMG for 45 years, was deeply touched by the exchange. 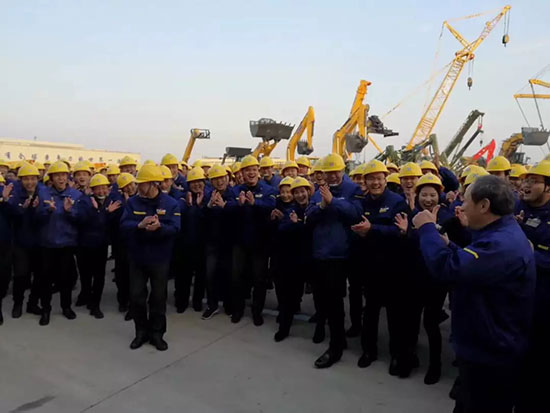 Even two hours after he’d left, the staff could clearly recall every evocative moment during President Xi's visit. "President Xi's care and encouragement endowed us with a huge sense of responsibility, mission and glorification," Chairman Wang revealed. "When President Xi clasped my hands firmly before saying goodbye, it conveyed his high expectations of XCMG. President Xi brought with him not only the spirit of the 19th CPC National Congress, but also the warmth and confidence for all the staff at XCMG. President Xi's deep affirmation of XCMG’s work is a tremendous form of support for us. It has pointed out the direction of the transformation and development we will embark on to build a stronger future. We are resolved to mold XCMG into a global leader in the construction machinery industry."

President Wang firmly asserted, “Under the guidance of President Xi's thought leadership on socialism with Chinese characteristics for a prosperous new era, we must make every minute and second count to successfully implement the objectives of development set out in the 19th CPC National Congress. Driven by innovation, we must dedicate all our efforts towards pushing ourselves to become a world-class enterprise and a pioneer in economic development, manufacturing development, and the development of construction machinery industry. In this way, we shall make new and greater contributions to the realization of China's ‘Two Centenary Goals’.”