One by one, these "big guys" were arranged in turn like iron-clad soldiers, standing in gallant array and showing an inspiring scene. This was an impressive moment at a harbor in Shandong recently. More than 200 XCMG large-scale equipment would start a new journey just from here.

As the hoisting operation began, XCMG "heavy equipment", including loaders, excavators and mining dump trucks, were successively loaded to the large ocean liner, and the entire loading only took 43 hours. 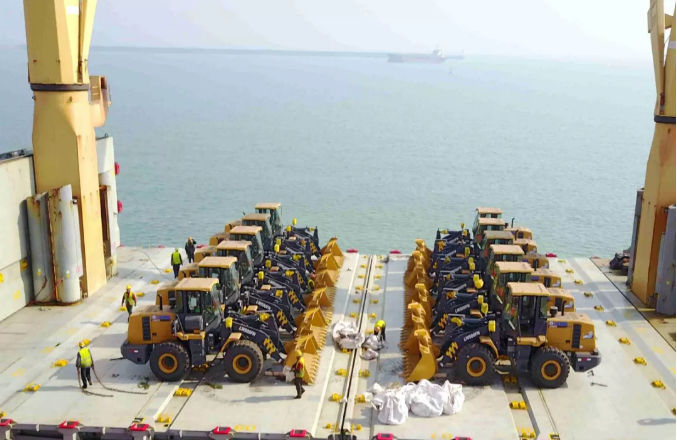 According to the person in charge, such a scale of large number of XCMG construction machinery transportation was the first for their harbor. As a leading enterprise in the Chinese construction machinery industry, XCMG enjoys high international prestige. This large-scale export fully demonstrates the popularity and influence of XCMG products in the international market.

To ensure the smooth execution of the shipment plan, production and operation personnel of the harbor made careful preparation, practiced the hoisting process several times in advance, optimized the process, and completed the whole shipment operations successfully within the prescribed time.

In recent years, with the expansion of internationalization strategy, brand awareness and reputation of XCMG have been continuously enhanced. By October of this year, the overseas export volume of XCMG has steadily occupied the first place among all Chinese-funded brands. XCMG has become the preferred brand of local construction machinery in many countries and regions along the "Belt and Road".

The route for this export is a marine transport "artery" of XCMG blazed after the opening of "Xuzhou" CR Express, the land "artery" for XCMG equipment. Through the "Maritime Silk Road" with rolling waves and blowing breeze, more XCMG equipment will be exported to the countries and regions.

Previous
One of its kind! XCMG was invited to attend the 3rd China Machinery Fair in Moscow!
Next
Water cellar build by XCMG in Africa: the most precious gift from China
Sign up for email on new advanced industries articles
Never miss an insight. We'll email you when new articles are published on this topic.

Want to know more? Contact your nearest dealer